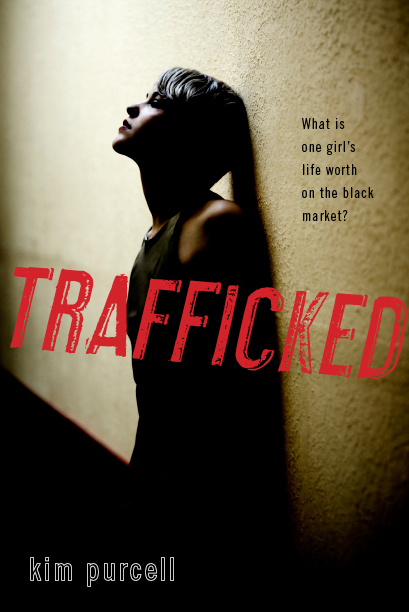 Hannah is an ordinary teenager growing up in Moldova until her parents are killed in a terrorist bombing. While she’s still mourning the loss, she gets an offer that sounds too good to be true: a job as a nanny for a Russian family in Los Angeles.

At first, it seems like her luck has finally turned around, but life with the Platonovs quickly spirals into a nightmare. Lillian, the mother, forces Hannah to work sixteen-hour days cleaning, and won’t let her leave the house. Sergey, the father, is full of secrets. And they refuse to pay Hannah.

Stranded in a foreign land with false documents, no money, and nobody who can help her, Hannah has become a modern-day slave. And the more Hannah unravels this family’s terrible secrets, the more her life—and her family back home—are in grave danger. Desperate and lonely, she reaches out to the boy next door. But in the end, the only one who can save Hannah is herself.

Hannah took two small steps forward in the immigration line entering America at LAX. She was in a large white room with a line for people like her and another line for people who belonged. The people who belonged laughed and slouched, wore clothes that fit their bodies, and smelled of milk, dry cleaning, and deodorant. The people who didn’t belong stood upright unless they couldn’t, wore dressier but older clothes, and smelled of body odor, hot sauce, fish, garlic, and cheap perfume.

Hannah wished she looked like an American teenager. If only she’d been able to change out of these dirty Moldovan clothes. At the airport in Romania, they’d made her check her suitcase, and she’d been so flustered, she hadn’t taken a single thing out of it.

In the suitcase, she had a brand-new pair of jeans that the good agent had given her to look more American, as well as her T-shirt that said GOOD NEWS with a monkey dancing below the words. Those clothes would have given her a type of armor, but this dirty white shirt with the frills on the front and the too-blue slacks from her babushka made her look poor and desperate, exactly what the good agent had warned her she must try to avoid.

She squeezed the book with her fake documents inside. Two couples, a family, and older woman and a man were in line ahead of her. Then it would be her turn.

The line slid forward like a slow escalator, pulling her closer to the grim immigration officers who sat on stools behind a long white counter, separated into glass booths. They were examining people’s documents, searching for fakes like hers. They waved most of the people through a large, white archway into America, but they sent some through a door with a tiny unbreakable window, which she was sure led to an interrogation room.

She’d never been a good liar.

"This novel offers a hard look at the realities of human trafficking and modern-day slavery. Purcell has created an accessible story that young adults can find themselves relating to and sympathizing with...Mature readers will be intrigued by descriptions of Moldovan culture and the intricacies of language and understanding, and will be completely immersed in this suspenseful, heartbreaking, and excellent read. " -VOYA 5Q **Starred Review**

"It's not easy to write a well-paced novel in which the protagonist is hidden away, never does anything and only goes outside four times in six months, but the tension of the story resides in the mystery of what exactly is going on. What forces brough Hannah to LA? Who are Sergey and Lillian? What is in store for Hannah? The final hundred pages pack a wallop as mysteries are revealed and Hannah almost suffers the fate she most fears. An eye-opening debut novel about modern-day slavery in America." Horn Book

"In this timely and fiercely honest debut novel, paced like a thriller, Purcell confronts the economic and sexual brutality inherent in the practice of human trafficking...The novel's intelligent, feisty heroine and strongly sketched supporting cast prove a powerful lens into this shocking issue and its psychological costs." Publisher's Weekly

"Purcell’s well-researched look into human trafficking has the slow pull of a dawning nightmare, and the simplest of events—say, a dinner party—are soaked with almost unbearable tension. Sergey and Lillian are not entirely good or evil, which puts readers in the same confused, helpless state as Hannah. Gritty, realistic, and eye-opening." Booklist

"Many reluctant readers won’t be able to put down this riveting novel. . . The characters ring true and as the plot reaches a crisis point, readers will be drawn in by the suspense of Hannah’s captivity. - School Library Journal

"Chillingly credible and unflinchingly revealed...Hannah herself, compelling and believable, keeps readers focused on her plight and that of other de facto slaves worldwide" - Kirkus Reviews

2013-2014 South Carolina Book Award Nominee in the YA category

Madison Reads Book of 2013 for Madison High School - Portland, OR